Both the Bank of England (BOE) and the U.S. Federal Reserve (Fed) issued policy updates last week suggesting they have become a little more confident in the economic recovery. Both may look to reduce their bond buying programs in due course. Equity markets dealt with the news reasonably well, finishing the week slightly up, but bonds fell as yields backed up in Gilts and Treasuries.

This change is powered by the view that inflation is proving to be more persistent than expected, as demonstrated by the raised forecasts from the Organisation for Economic Cooperation and Development (OECD) which show consumer prices rising 3.7% in the Group of 20 in 2021, and 3.9% in 2022*.

Both food and energy prices are surging, supply-chains for everything from shipping to semiconductors are showing strain, and some markets are already seeing shortages of skilled labour as demand increases further with the lifting of lockdown restrictions in many countries around the world.

Nevertheless, global recovery is far from secure. Last week, global manufacturers reported lower activity once again. Moreover, with many still unvaccinated, the spread of the Delta Variant is causing headaches for central bankers who face the prospect of “stagflation lite”, where inflation climbs and expansion slows.

Last week, the Bank of Japan showed no signs that stimulus is to be withdrawn, while the People’s Bank of China injected the largest short-term liquidity into the financial system in 8 months. Unfortunately, this is not the only thing drawing eyes to the Chinese financial market; China Evergrande Group, is facing a debt crisis.

Unable to make interest payments on their $300bn debt, the property giant is keeping global onlookers on edge. It’s not yet clear if Beijing will provide the company with the funds needed  to meet its obligations.

The European Central Bank (ECB) president, Christine Lagarde, pushed back on suggestions of a taper, instead describing the slowed pace of asset purchases as a recalibration. Perhaps unexpectedly, even the Fed has changed its strategy since it was last raising rates – now contending that the prospect of bringing more people into the workforce (and pushing down unemployment) makes it ok to allow the U.S. economy to run somewhat hotter than traditionally anticipated.

The result? While many emerging markets are already hitting the brakes, and rich-nation central banks may be anticipating a slow-down, a significantly looser monetary policy is likely to continue globally for some time yet.

That is good news long term for equities, but investors will also be watching Congress in the week ahead, as lawmakers attempt to pass a funding program in time to avert a shut down on Oct 1st 2021. The debt ceiling is likely to be part of that debate, but strategists do not expect it to be resolved simultaneously. This could hang over the markets for several weeks before Congress raises the debt ceiling.

We still have fears of contagion from a debt default by Evergrande, China’s second largest property conglomerate, the S&P 500 is only just hovering above its 200 day moving average and bond yields look they could break higher – so, whilst the last week was lovely and quiet, I wouldn’t be surprised if we get more drama from markets in the coming weeks. I wouldn’t bet against October living up to its reputation as the most volatile month of the year! 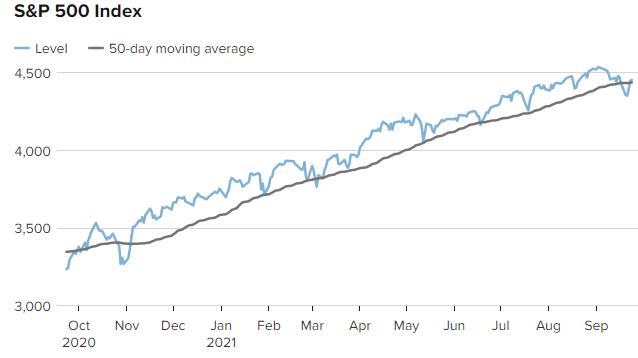 This financial market commentary is for the week commencing Monday 27th September 2021.