Both sides of the coin

This article looks to recap on the highs and lows of 2019 and what we can learn from what we have seen and heard across the industry. Against a strong and stable market backdrop that saw global equity markets continue to march higher and higher, the year came with a great deal of controversy that if all else acts as a clear marker for well needed change. The devastation left in the wake of the Woodford crisis made clear that tighter controls are needed to ensure such issues aren’t experienced by investors again. The investor is king and should be treated as such, something we must forget at our own peril. We hope this article informs and gives you a good feel for our opinions and take-aways from yet another eventful year in the industry.

A great year for investors

By now it’s no secret that 2019 was a good, if not great, year for risk-asset investors. In fact, one of the best on record. Equity markets worldwide continued to rally higher throughout the year, reaching countless new highs day after day, and boasting year-end double-digit growth across the board. The US [25.65%], Europe [19.99%] and China [18.69%] took gold, silver and bronze with the UK not far behind generating some 16.37% in the All Share for investors. Chart 1 – Global Equity Index Returns, 2018 / 2019. 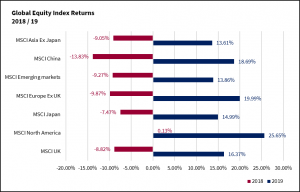 Sentiment overall was markedly more positive than the year prior. Easing trade tensions between the US and China and a ‘phase one’ agreement now in place, coupled with the Conservative Parties landslide victory in the general elections, helped boost the global trade position and reduce Brexit uncertainty, positively charging investor sentiment into the backend of Q4 2019. This more positive outlook was a welcome reversal on a very tough and very volatile 2018 in the capital markets.

With yet another positive year in 2019, we continue to ride the longest, albeit it not yet the strongest, bull market in history as we saw the FTSE All Share reach 193% since the nadir of the Financial Crisis in March 2009, with the S&P 500 also hitting 427% over the same period. Granted, we have endured pockets of considerable volatility throughout the last 10 years, making this bull run more secular than a thoroughbred, but nevertheless we continue to march higher.

Many leading indicators of global economic health would suggest we face a slowdown in growth worldwide but we are yet to see this priced fully into the capital markets as the opening bells of 2020 have so far been met with even higher highs and overwhelmingly positive investor sentiment, generally.

£165 billion of new investor capital was added to the UK Retail Investment markets in 2019, further confirming this shift in sentiment and a stabilising of concern amongst investors. This again comes as a welcome turnaround on 2018, that saw net £164 billion taken out of the markets over the year. 2018 was the first year since 2008 that saw more money taken out of the market than added and puts clear number to what proved through that period to be a volatile period driven by predominantly hawkish narrative. 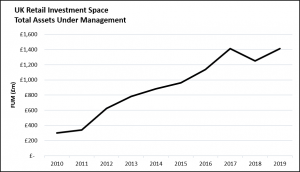 A healthy percentage of that flow found its way into Index tracking funds, as more and more advisers and clients seek low-cost alternatives to accessing the financial markets. Much of this move is driven by a failure to find value in active managers on the average. Many argue that those managers who do outperform are very difficult to find before the fact, but we believe this is just as much a question of process as it is probability. There are many managers who outperform their benchmarks and we feel the process used to find them can increase your chances of doing so exponentially. To put some numbers to the above, see the table below for the percentage of active managers who beat their respective benchmark in 2019.

Although the above statistics would suggest its much harder to find an active manager that outperforms on the balance of probability, it does not mean its impossible. As noted above, we firmly believe the probability of success is determined by process. Process determines probability and probability determines outcomes.

All in all, 2019 was a great year for investors active in the equity markets and the bull still runs strong into the new year. We sadly do not have a crystal ball, but we believe there to be opportunities in all climates, it’s simply a case of knowing what to do and when.

We would always hope that we struggle to find content for this section but there are sadly some standout moments of 2019 that we would be remiss to not report on. The intention of this article is to report on news, both good and bad, and what can be learnt from it. After much deliberation, we believe the following two topics to be of the greatest significance in 2019 and have much wider implications for the financial advice market into the future and how things are done moving forwards.

Once the poster boy for UK value investing, unrivalled outperformance and asset management generally, Neil Woodford now finds himself the face of a much more serious and far less marketable issue, poor governance. 2019 saw the once famed ‘Oracle of Oxford’ undo almost three decades of success and unwavering public appeal to now find himself blacklisted in the UK Financial Services sector. Warren Buffet, an idol and great influence of the Oxford based Manager, once said it takes 20 years to build a reputation and 5 minutes to ruin it, and that knowing this should see you act differently. There now seems very little the manager could do to reconcile with the UK investing public, whose reluctance to waiver fees in the dying hours of his flagship fund will forever leave a bitter taste in the industries mouth.

However, this is not the story of one man, but the story of thousands of investors who have suffered at the hands of poor management, overconfidence and clear negligence. Billions were lost, and lives changed forever in one of the biggest financial catastrophes of more recent times. Woodfords dangerously high exposure to illiquid, unlisted stock could once be celebrated as a key driver of outperformance on paper, but sadly returns are only of value when they can be realised by investors. It was once investors tried to withdraw capital that the problems began. This proved to be the beginning of the end. Once a £10 billion plus fund, Link now work to salvage what they can of the remaining £2.5 billion left.
Although the main culprit, not all blame can be left at the door of Neil Woodford. Many questions must now be asked of the regulator, the ACD and distributors like Hargreaves Lansdown whose failure to act sooner, or refusal to raise the flag and blow the whistle when aware of the shortcomings within the fund, make them complicit or at the very least culpable in some capacity. There were seemingly many canaries within this mine and clear signs of undue risk being taken far before action was finally taken.

It is not the place of Clever to gestate on what must or can be done next, and the best course of action to take moving forwards. What can be said however is that existing processes and protocols are only as good as their outcomes and this blackmark on the history of investment management would suggest things need to change so to reduce the chances of this happening again.

DB Transfers and the PI Crisis

Many voices within the industry have warned of such a day in the years gone by, as we have seen the DB transfer market boom into a key driver of revenue for so many advice practices. It has often been remarked that surely, on the balance of probability, the advice to transfer out of an existing scheme is not relevant and suitable to all of the thousands who take the plunge every year. Nevertheless, the train rolled on. 2019 however saw a marked shift in sentiment, as many PI insurers and talking heads in the industry began to appreciate far more the risks of such activity, where previously they had been blinded by the reward.

As a result, we now see more and more Advice firms relinquishing their DB transfer permissions in the face of increased scrutiny and business crippling premiums from Professional Indemnity Insurers. There is an increasing concern about the quality of advice given, the FCA concluding in their June 2019 published survey that a great deal of DB transfer advice is “still not of an acceptable standard”. The PI Insurance market has seen these concerns as a marker for refusing to include DB cover at renewal to growing number, regardless of the claims experience each adviser firm actually has.

The concerns of the regulator are that poor standards of advice can leave clients disadvantaged and in many cases in a position to claim should the advice not have been suitable. Whilst markets march higher, and the income received by investors from their newly recommended products remains stable, the risk of claim is lower. However, should the markets reprice considerably to the downside, negatively affecting the income stream received by these investors and leaving them ultimately worse off, we may see the concerns of the regulator come to life through increased claims and advice dispute cases.

2019, like the many years before it, brought with it many new challenges and obstacles to test the very foundations of our industry and our resolve as its participants. For most, the year brought great returns and a welcomed turnaround from the dower 2018 we are all more than happy to forget. However, for some, the year will forever be remembered as the time they lost not only much of their wealth, but also their trust in the industry. A time when apparent fat cat fund managers took undue risks to help bolster their own position. A time when many seemingly looked the other way.
In reflection, we should not dwell on what was done but what can and will be done to ensure this doesn’t happen again. Let not the actions of a few speak for the many.