There is an unfortunate history of epidemics around the world, with Coronavirus being the most recent outbreak.

Since 1981, there have been 13 major cases recorded globally, with the MSCI World Index falling 9 out of 13 times (69% of the time) in the month following the outbreak: 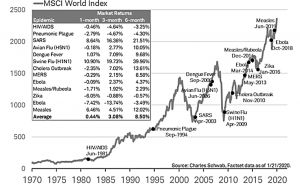 Source: Charles Schwab, Factset data as of 1/21/2020. Past performance is no guarantee of future results.

But 3 months after the event, the opposite is true, with the global Index returning to positive performance, again 9 out of 13 times.

And it’s important to remember that correlation is not causation. There are many events that combine to price stock markets, with epidemics being just one.

Today the US accounts for more than 60% of the global index and has always been hugely influential on global markets. Other events that could account for negative performance during the 1981 epidemic include the fact that the US economy was slowing down and heading for recession, with top bracket income tax rates at 70%, corporation tax at 48% and high unemployment peaking at 10.8% (an all-time high) in December 1982. Only once has the US come close to the same level when in October 2009 the unemployment rate rose to 10% following the ‘credit crunch’ and sub-prime banking crisis.

Focusing purely on America using Dow Jones Market Data, the S&P 500 has shown similar patterns of loss and recovery throughout the same epidemics: 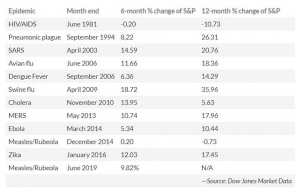 Since the SARS outbreak in 2003 (also emanating from China), international travel and globalisation has increased dramatically, thus widening China’s footprint and impact on the world.

For example, Chinese Container Port Traffic is up from 61,898,336 units in 2003 (20% of all shipping containers in the world) to 225,828,900 units today[1] (28% of all containers in the world). Manufactured goods from China travel across the world at a tremendous rate so any slowdown in China could mean a slowdown in global growth and also in the supply chains of global companies who reply upon China as the ‘factory of the world’.

But the impact could widen as China is also a major consumer of natural resources and despite being a stellar producer, China also relies on imports for the same material, accounting for nearly 50% of global steel use in 2018[2] and more than 50% of all copper use in the same year[3].

If China is on lock-down, production and the economy comes to a standstill. But for how long?

Despite these concerns, history has shown that markets react initially to epidemics although recover over the longer term giving investors reason to remain invested.